Leisure Devonshire Bideford to Torrington along the Tarka Trail

Bideford to Torrington along the Tarka Trail 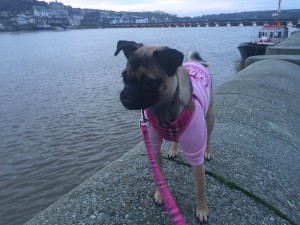 Betty and I set off along Bideford Quay and caught the dawn light on the Old Bideford Bridge. We walked past the Oldenburg Ferry, all packed up for winter and I relived the awful trip I was made to go on when I puked all over someone’s feet.

The tide was super high and the River Torridge was almost to the top of the Old Bideford Bridge arches. Each arch is a slightly different size. The story goes that the wealthy people of Bideford were asked to sponsor an arch to raise enough money for the bridge to be built. The more you donated, the wider your arch.

We crossed the bridge and took up the Tarka Trail at East-the-Water.

From then on, it is simple to just follow the disused railway track.

Unlike the opposite direction towards Instow (see Boxing Day on the Beach article), this section of the Tarka Trail is smoother and you do get the cyclists in lycra bombing around. There are still signs up asking for people to observe etiquette, but I guess they are hard to read at high speed. Anyhow, if you keep your ears and eyes open, you can generally emerge unscathed at the Puffing Billy.

There is one scary section where you have to go through a railway tunnel. Even today, as I approach 40 at an alarming rate, I have to run this part.

The great thing about walking the Tarka Trail is that you get to read all the information boards about how industrial life used to thrive along the route, involving: Limekilns, woodlands, mudflats, saltmarsh, Tide Lock, the Rolle Canal and the Beam Aqueduct.

If the Tarka Trail with Lycra-clad cyclists is not your thing, there are other walking routes. In the summer, when the river hasn’t burst its banks, you can walk along next to the water. As I said, my mum parks the car up at a disused dairy plant in Taddiport and walks along the river to the Puffing Billy Torrington and back. When you can’t walk the river bank, you follow Rolle Road, which is mostly disused apart from sewage trucks, dog walkers and horse riders.

Leaving the Tarka Trail to take the Rolle Road from the Puffing Billy to Taddiport. 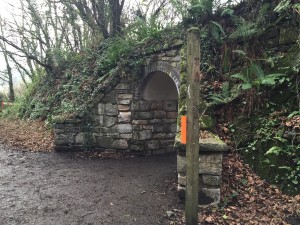 The turn down from Rolle Road to the river bank after leaving the Puffing Billy.