Betty Boxing Day at the Beach

Boxing Day at the Beach

Bloated and sluggish from Christmas Day overload, Betty and I decided to walk from Bideford Quay to Instow along the Tarka Trail on Boxing Day. The trail is popular with walkers and cyclists and covers a total of 180 miles in a figure-of-eight route, centred on Barnstaple. My mum’s house is near Bideford quay, and I knew Instow beach would be busy with other dogs enjoying the sand. 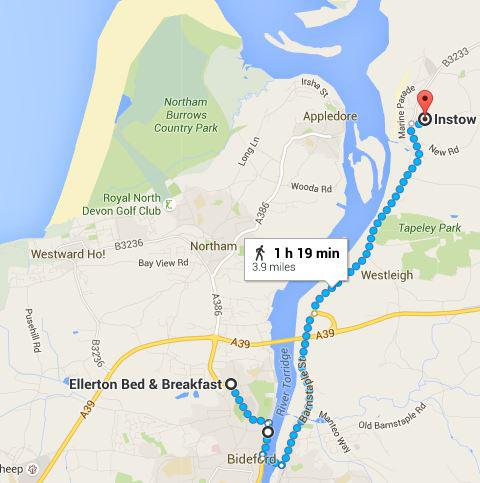 We crossed the Old Bideford Bridge and turned left to pick up the trail that runs parallel to Barnstaple Street. You can cycle the trail, but serious cyclists in lycra stick to the road because the section between Bideford and Instow is a little rough. You do get some cyclists along the trail, but they mostly travel a lot slower and are more careful about not running pedestrians and dogs down.

The route is simple – just stick to the trail and enjoy the views of the River Torridge. You go past a weird M.O.D. post where someone, a long time ago, saw fit to attach toy monkeys to the fence, so they look at you as you go past. Maybe that is the technique used to keep the building secure when no one is manning it. You also pass Tapeley Park stately home and gardens, which puts on several events in the summer. 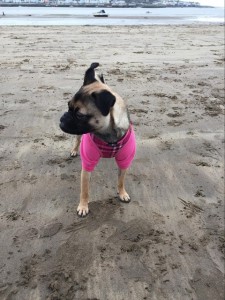 We shared the route on Boxing Day with several dog walkers, joggers and cyclists, and, amazingly, the weather stayed dry. We turned off the trail at the disused Instow train station and headed along Marine Parade to the beach in front of the Commodore Hotel. I haven’t been in the Commodore for years, but it used to be a staple for our family Sunday lunches. We tend to eat at home now and get a Hockings ice cream if the vans are out (it was December: they weren’t).

As I’d predicted, the beach was crazy with dogs going loopy with joy at being on the sand. Betty joined in the fun and we walked the length of the beach and back again.

We retraced our steps back towards the Tarka Trail entrance at the North Devon Yacht Club, stopping at The Quay pub for a cappuccino and Lotus biscuit. Two old boys were nursing pints at the bar and the only other person there was the son of the owner, eating a full English breakfast before heading off for another Christmas dinner. I admired his stamina. There was a water bowl for dogs at the door and I shared my Lotus biscuit with Betty. Fortified, we set back along the Tarka Trail to Bideford.

If you fancy returning back to Bideford by a different route, you can board the Instow-Appledore ferry, which runs between 1 April and 31 October, and if you wanted to take the scenic route, turn right along Appledore Quay, walk down Irsha Street to the Appledore Lifeboat Station, and take a dog leg around Northam Burrows Country Park and have some freshly cooked doughnuts at Westward Ho! seaside resort. 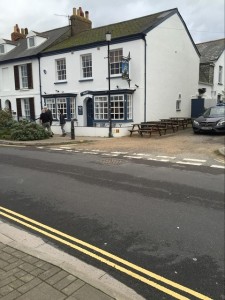 We had to get back for another family lunch, so we kept it simple and returned along the Tarka Trail. This time, instead of approaching my mum’s house from the road, we cut through Victoria Park. Dogs are supposed to remain on the lead, but it’s a lovely area for a stroll away from the road and there are several attractions – a children’s playground, paddling pool, rugby club, bowling green, gallery and museum. Betty and I enjoy the Cafe du Parc outdoor seating with choice of cake. Most attractions are kept for the summer months but there was a rugby match going on today, which explained the manly shouts we’d heard from across the water.

The round trip took us about 3 hours, with a stop at the beach and just enough time to drink a cappuccino at The Quay. We got home just in time to share the aperitif and assemble the starter, so we could take credit for helping just a little bit.