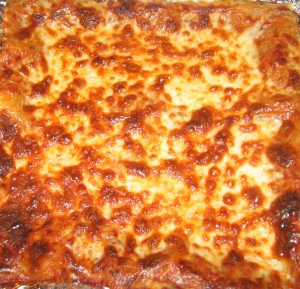 Betty gets red carpet treatment when she goes to Clowns. Although there is a sticker on the door that says dogs are not allowed, it is up to the owner’s discretion whether they are admitted or not. Given the father who owns the business is taking a break and recovering from illness, the place is being run by his two daughters, who love Betty coming to visit. She gets a bowl of water and a free side order of ham.

The cafe is tucked away and so it mostly remains a favourite of locals rather than being stuffed full of tourists. It is run by an Italian family and the food is prepared the way “mamma used to”. I usually go for the small bolognese because it’s plenty big enough and a cheap dinner. My friends tend to go for the aubergine parmigiana and the bricks of lasagna.