Uncategorized What to do when dewclaw is damaged

What to do when dewclaw is damaged

Betty is not usually particularly fussed about being muddy after a walk. She quite enjoys having a nap, rather than clean herself up. I usually pop her in the bath and shower her legs down, at least. Now we’re heading into spring, it’s not so necessary to bathe her after a walk as the paths aren’t so muddy. We did one of our favourite walks at the weekend – the Hildersham circular – and I remember thinking to myself “excellent, won’t have to bathe Betty later on – paths are drying up nicely”, so I was surprised to see her licking her paw later that day.

Bit later into the evening and I noticed that she was still licking her paw from time to time, and thought that it was quite odd, given that she’s a bit of a mucky pup if she can get away with it. Then I had a light bulb moment and considered the possibility that something was wrong with her paw. She hadn’t seemed particularly down or upset about the situation, so it hadn’t occurred to me before that anything was wrong with her. 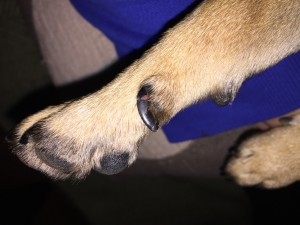 On closer inspection, I saw that the nail on her dewclaw was damaged. She’d had the same trouble once before, while we were on holiday, and I took her to a vet who gave her some pain killers and antibiotics, to help prevent any infection, because dogs will continue to lick anything that feels odd. So, I knew it was probably best to take her to the vets again on this occasion. As it was a Saturday night, I set my mind to get up early and try to steal one of the first appointments of the day, thinking that early on a Sunday would be a quiet time. We also had plans to meet friends for lunch and, if we got sorted quickly, we could still make those.

We snagged the second appointment and the vet complimented Betty on the work she’d done at removing the nail herself. The quick wasn’t damaged, so the vet advised removing the broken nail and allowing it to grow back. As the same thing had happened twice, I voiced the idea that the dewclaw be removed completely, as I’d heard that they don’t serve much purpose, aside from causing problems like this. The vet said that it wasn’t right to do it in this case, as Betty has a properly formed “thumb” that is of some use to her – apparently, some dogs use their dewclaws to grip things if they have a proper pad supporting the claw and some dogs’ dewclaws are useless because they are just flaps of skin. Also, given it’s only happened twice in the past year, in her book, it wasn’t a regular occurrence. Usually, they reserve removing the dewclaw for working dogs, who are damaging them every week or so.

The vet took Betty into the back room and I heard her cry out. When she came back, she had a rather attractive green bandage that reached up most of the length of her leg. It seemed a bit OTT for what was a damaged nail, but I thought Betty would appreciate the sympathy she’d get from sporting such an appendage, so I said nothing. The vet had given Betty the first day’s dose of painkillers, which made her quiet for the rest of the day – perfect for having lunch with friends and not having to constantly untangle her from chair and table legs. She got the expected amount of fuss from the barmaids and other Sunday lunchers, and got given many dog biscuits from the bar and titbits of meat from my roast dinner. 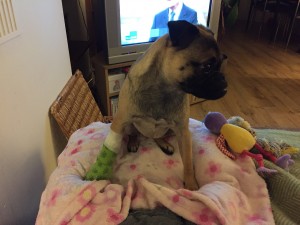 One day on, the bandage is still attached. It has to survive one more day before I can remove it and put a head collar on her to stop her from licking the wound. Five days on and we have another appointment at the vets to check that everything has healed nicely. Betty is getting around quite well with the bandage, choosing to stick it in the air and hob around quite nimbly on three legs. She’s a lot quieter than normal and I’ve put the duvet on the sofa downstairs for her and been and bought her some more toys from the charity shop to cheer her up a bit.