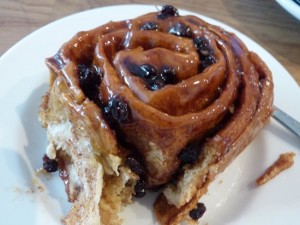 One of the ‘must dos’ in Cambridge is to sample a Fitzbillies Chelsea Bun. The cafe has been selling these sticky delights since 1921 and the recipe is not allowed to be written down. Steven Fry led a public outcry when the cafe was threatened with closure by tweeting “No! No! Say it ain’t so – not Fitzbillies? Why I tweeted a pic of one of their peerless Chelsea buns but a sixmonth ago.”

There are two sides to the cafe – one for serious meal eating, where dogs are not allowed, and the other for cafe snacking, where dogs are welcome. Near the cafe, there are several other decent places to while away your time in Cambridge, such as the Fitzwilliam Museum and the Botanical Gardens, neither of which are dog friendly. Instead, on exiting the cafe with your dog, walk along Trumpington Street, away from town, and turn right down Mill Lane towards the Mill Pond. Amuse yourself with people trying to turn their punts at one of the most congested sections of the river in summertime, cross the bridge and hug the river all the way to Grantchester.