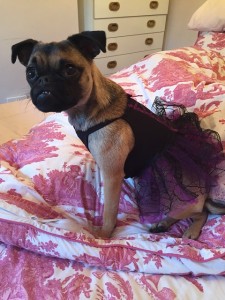 Betty’s social diary is now officially busier than mine. Her pet sitter, Sue, invited her to a Halloween tea party and I was the chaperone. Sue had stipulated “no costume, no entry”, so I took Betty to look at the options in TK Maxx and B&M. We picked up a Santa outfit for Christmas Day, but the Halloween selection was sold out. We headed to Pets at Home and had a rummage in the reduced bin.

We decided on a black and purple Lycra number, with strappy shoulders and a frou-frou skirt for Betty, whilst I cobbled together a black cape and witch’s hat from the fancy dress shop down the road. The stick-on warts, broom and gnarly fingernails were tempting, but knowing that nobody would be paying me any attention, I left it.

We decided to walk to the party. Partly to expel some excess energy and partly because I wanted to maximise the exposure of our outfits, given the high cost-to-wear ratio. As soon as I slipped the dress onto Betty, I sensed her little body go rigid with disdain. Her mind was made up. She wasn’t going anywhere until the offending item was removed. So I was left looking like an idiot, dressed as a witch and walking a dog, from one side of Cambridge to the other.

“Correct me if I’m wrong, but don’t witches have cats?” one youth trilled as he cycled past. We took a scenic route over Coldhams Common and across Newmarket Road to Stourbridge Common, away from the main roads so Betty could run around off-lead. We crossed the river at the Green Dragon in Chesterton and walked along the river. As usual, the area was busy with walkers, rowers and cyclists, but no one else was wearing fancy dress. I started cursing Betty for her lack of solidarity. 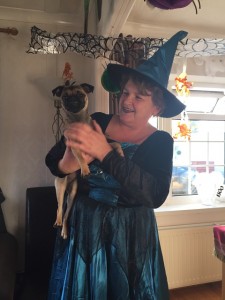 On arrival at Sue’s, Betty, almost delirious with excitement, failed to notice me dressing her before she bolted inside. Sue’s house was full of ghoulish-looking adults, pinned against the walls, whilst children ran around hitting each other with balloons. Betty said her hellos and then quickly installed herself at the dining table next to the plate of cocktail sausages.

Two hours on and Betty had consumed 4 cocktail sausages, several crisps and an unintentional mouthful of pumpkin pie. Her eyelids grew heavy and her body started slumping into mine. Having missed her usual noon lie-in due to dog agility class, I knew it was time to get her home. We said our farewells and left the party in a blanket of darkness and perfectly timed spooky mist.