Betty My First Holiday without Betty

My First Holiday without Betty 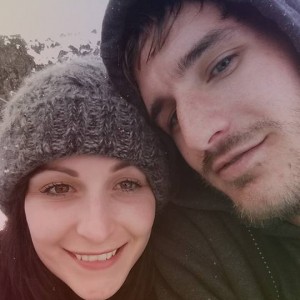 My brother, Sam, and his fiancee, Kristina, moved out to New Zealand during September 2013, so it had been over 2 years since I last saw them. I decided it was time to make the effort to go half way around the world.

My mum recommended flying Emirates and taking the route that requires you to change at Dubai and Melbourne. The journey took me almost 2 days and I watched a lot of films on the plane.

Whilst I was away, Betty went to stay with “Auntie Sue”, her pet sitter. You can read an interview with Auntie Sue in another post.

Emma: Arrived in Wellington and was surprised by the amount of Lord of the Rings paraphernalia hanging from the ceiling. Dropped my bag at the airbnb place, almost at the top of Mount Victoria, directly above my brother’s flat on Evans Bay Parade. The housemates seem pretty cool.

Betty: Had a lie-in after being up late to watch the fireworks. Played in Auntie Sue’s garden with her dogs and helped clear up some leaves. 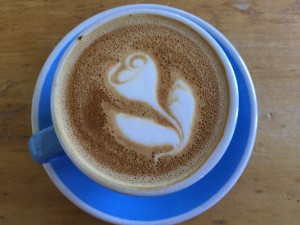 Emma: Toured Wellington’s bays in the car and saw the Aotearoa “long white cloud” in all its glory from Seatoun. Drove into town for lunch and fell in love with Cuba Street. Had my first trim flat white and eggs benedict.

Betty: Had a walk along the river and met a horse. Weather was freezing, so I wore my thickest jumper. Got lots of fuss from random people. Had a nap with Uncle John in the afternoon while Sue did her housework. 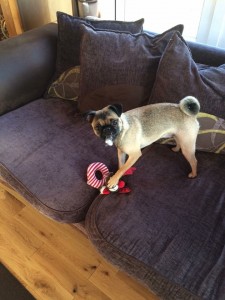 Emma: Went to St. Paul’s cathedral and then to Olive on Cuba Street for coffee. In the evening, we all went to Roxy cinema, owned by Peter Jackson, to see Star Wars VII. Everyone apart from me loved the film – I’m not a fan of sci-fi and so took the opportunity to nap. Given Peter Jackson worked on the Star Wars film and Lord of the Rings, there was a collection of memorabilia on display.

Betty: Helped Auntie Sue tidy the house a bit and let her put a couple of my toys away. Mario’s head is starting to come off. It was too cold to go out in my opinion, but Sue took me anyway. Met two Spaniels and had a good runaround. Got back and had a nap before playing with Rosie in the garden. Rosie is Auntie Sue’s top dog, but I’m equal with her.

Emma: Nice girly shopping morning before gathering my airbnb housemates for a trip to Te Papa museum. Funniest moment was seeing a giant squid in a tank of formaldehyde and my housemate saying “is that alive? If it is, that is really cruel.”

Betty: It rained all day, so I thought I would just relax, but I got taken for a walk in the RAIN anyway. Rosie came with us. I thought it was bad enough to have to go out in the rain, but then Auntie Sue made me have a bath when I got in and Merlin the cat just sat there watching me. After all the trauma, I curled up with Uncle John, who comforted me.

Emma: Had a morning coffee at Bizzy Lizzy’s café in Wainuiomata before going “tramping” in Catchpool’s regional park. Spent the afternoon looking at view from Mount Victoria before going to Paremata for a family barbeque at the airbnb my mum is staying at. My mum is out here at the same time as me, but staying for much longer, with her partner, Dave.

Betty: Auntie Sue took me to visit a friend of hers who gave me a lot of fuss and shared a human biscuit (shortbread) with me. All the fussing makes me tired, so I had an early night. 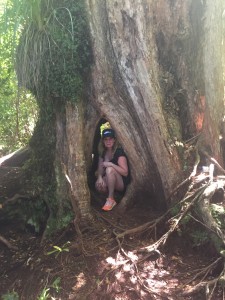 Emma: Spent morning tramping in Rivendell in the Kaitoke national park, made famous by Lord of Rings. Stopped off at Stonestead Devonshire Teas in Te Marua, about 45 mins drive from Wellington, just for coffee, no scones.

Betty: The weather is nice and Auntie Sue has left the back door open. I’m in and out like a mad thing. After lunch, we went for a walk. I have chewed the label off the toy bear that belongs to Auntie Sue. She found out and chased me to take it away, but I hid under the table. I let her have it in the end.

Emma: Tramped around the Lower Wainuiomata Dam in Lower Hutt in the morning and then went to Maranui cafe on Lyall Bay. In the evening, I treated Sam and Kristina to a paella at one of their favourite restaurants, El Matador, in Cuba Street.

Betty: Today, I bit the head off my Mario. White stuff came out and Auntie Sue took it away. I am not too saddened by the loss because I have some other toys.

Emma: Took the funicular up to the Botanical Gardens in the morning and then looked around the New Zealand Portrait Gallery and Academy of Fine Arts after lunch. Stopped off at the Boat cafe on Oriental Bay for a drink and had a night in with the housemates.

Betty: I met a new friend today. Her name is Polly and we got on very well. I’m missing my mum now so Auntie Sue gave me extra cuddles. 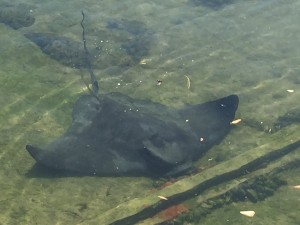 Emma: Knelt on a Stand Up Paddleboard (SUP) under my brother’s instruction. It was too windy to stand up and I gave up after 15 minutes because my knees hurt. Saw a couple of stingrays basking in the sun. Went to Otari Wilton nature research and did the Red walk. Went out as a family for dinner at the Foxglove Bar and Kitchen on the Queen’s Wharf.

Betty: Had a lie-in and got up for a late breakfast. Helped Auntie Sue do the beds. She was taking the sheets off, so I helped drag them out of the room. She was telling me not to, but I helped her anyway. 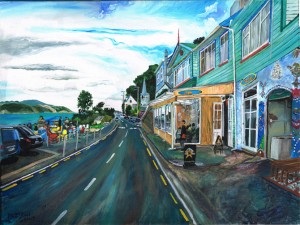 Emma: Back to Otari Wilton for the Circular walk this time. There was a great BBQ picnic area at the bottom of the valley with a stream to paddle in, but we’d left our lunch at the car. Must go back and do that again properly. Started heading back to the airport along Scorching Bay and stopped off for a last flat white at Scorch-o-rama Cafe. Just time to pop into Weta Cave to see more props and monsters from films like Lord of the Rings.

Betty: I have been having a good time, playing outside with Rosie and the other dogs in the morning and going for another walk in the afternoon. I’m starting to wonder if my mum is ever coming back.