When I was a teenager, I went to Grafham Water for a weekend to improve my jazz flute playing. We stayed in dormitories and attended various workshops according to our performance level and the type of instrument we played. It was at this weekend when, at the tender age of 17, I met a 30 year old man who introduced me to the ways of the world. Anyway, that is another story.

Grafham Water also used to be another place that my parents went sailing. My mum was an instructor and helped out with various courses. I go past the turning on the A14 whenever I visit my family in the Midlands and so, this time I stopped off on the way back to Cambridge for Betty and I to stretch our legs.

The weather was deceptively nice until we purchased the parking ticket. Having no change, I went to the cafe to buy a ticket over the counter. I had no notes either and the minimum spend on the card was £5. Given the parking was £2, I decided to buy a coffee and a sandwich as well. Dogs aren’t allowed in the cafe, but there are picnic benches outside. I chucked the sandwich in the car and, although slightly perturbed by how much larger the lake looked than I’d remembered, Betty and I set off along the concrete track. 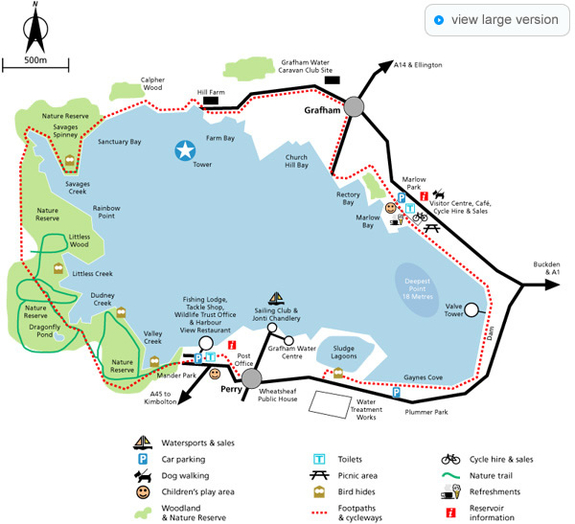 About 15 minutes in, we saw an enticing footpath sign pointing towards a route that looked a lot more interesting than the cycle path we had been following. We turned off along the footpath and that, I now know, was a mistake. We pushed our way through reeds that had grown to staggering heights, slipped about on mud, all the while thinking with false joviality, “what an adventure we are having!” The wind had picked up and the reeds were threatening to stab me in the eye. I could tell that Betty was questioning my motives for continuing on this path, but I thought it would turn out right in the end.

Finally, the reeds gave way to some fields and the footpath turned into a bridleway and went through a forest. I got the sense that we were somehow heading away from the lake, but trusted that the trail would take us all around and back to the car park. From that point, I really didn’t have a clue where we were and where we were going. We were at a high point, totally exposed to wind and rain that was now lashing down. My lightweight summer macintosh was no match for the weather and poor Betty’s jumper was soaked through.

I saw some water and headed across some fields in an attempt to get us back on the trail that I knew circumvented the lake, but the water turned out to be a different lake entirely – something very small. We were cold and wet, we didn’t know our location and we were plagued by huge pylons overhead that were cracking, alarmingly. I remember seeing a farm a little way back,  so we retraced our steps and I prayed that there would be someone in – and that they wouldn’t turn out to be an extra from the hillbilly horror film, Deliverance.

The man who answered the door was middle-aged, wore dungarees and had crazy long blonde curls that stuck out from the side of his head. This is it, I thought. Ah well, life, it was nice knowing you. He listened to my tale of woe about getting lost but showed no sympathy. He just told me that I shouldn’t have left the trail and that if I went back through the woods, I would come to the cycle path I’d been looking for. If I turned left, I’d get back to the cycle hire place where I’d parked and if I turned right, I’d carry on around the water. Given that we’d been walking for 2 hours already and it was starting to get dark, I made the decision to give up on completing our route and just head back the way we’d come.

Three hours later, we arrived back to the car and vowed that if we ever did try to walk the 10 miles around Grafham Water in the future, we would definitely stick to the cycle trail.