Betty A Pug or Not a Pug

A Pug or Not a Pug 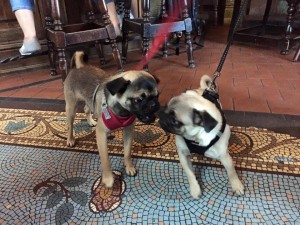 It is no exaggeration to say that people have literally stopped in their tracks to ask about Betty. Cars pull over, cyclists dismount and people just start talking to us. It’s like being with a celebrity.

They guess she’s is a Pug cross – the curly tail, dark face and slightly squished nose give that away – but they think the cross comes from a Jack Russel or Chihuahua. Jugs and Chugs are more prolific than Pugs crossed with Miniature Pinschers, or “Muggins”. Many times, I also have to explain that Pinschers are similar to Dobermans and, yes, they do have miniature versions.

The benefit of a pug cross is that they are less likely to have genetic health problems, although it is hard to predict their exact temperament and appearance. The variation within the same litter can be quite significant. You can get an idea of temperament by researching the characteristics of both breeds. In my experience, Betty has all the characteristics of both breeds, in abundance:

I think Betty is so amazing that I have written to Sooam Biotech in South Korea to ask if they are running their competition to clone a pet dog again. The previous winner was Rebecca Smith, a chef from West London, who had her beloved Dachshund, Winnie, cloned in 2014. I have received a reply to tell me that the competition is not running at the moment, but they will consider Betty if the situation changes in the future. Meanwhile, I was sent costs and instructions for cloning and cell banking. It’s way too expensive for me, but I read that Simon Cowell was thinking of stumping up the cash to clone his Yorkshire Terriers, Squiddly and Diddly.