Leisure Days Away Trip to Ireland and Pet Passports

Trip to Ireland and Pet Passports

My boyfriend Dan comes from Galway in Ireland and, three months into our relationship, it was time to meet his friends and family. Our plan involved lots of driving around to see various places of interest and call in on people, so we decided to take his car on the ferry. This also meant that we could easily take Betty with us for not much extra cost – just a 30 Euro administration fee for the ferry ride and the cost of getting her pet passport sorted.

The main point to figure out when taking a pet abroad is really the time it will take to get all the steps completed in order for the vet to issue a pet passport before you travel. Your pet needs up to date annual vaccinations, including rabies, which can take several weeks to complete if you are out of date. You also need to get the timing exactly right for a worming treatment, so your pet is covered when he re-enters the UK. You can check out all the requirements on the UK government’s website, but also go to speak to your vet around 3 months before you travel – before you even book your tickets, just so you can check you’ll be fine with the necessary arrangements. It may turn out that you decide not to take your pet away with you, and then you’ll have to look at alternative methods of care whilst you’re away. You should also check out your carrier’s website to see if they have any specific requirements – we travelled with Irish Ferries and their page is here.

List steps for getting pet passport, along with timings, so you ensure you leave enough time before your trip. 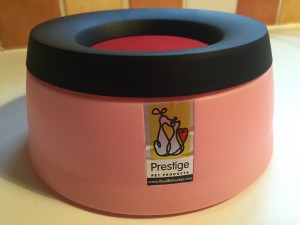 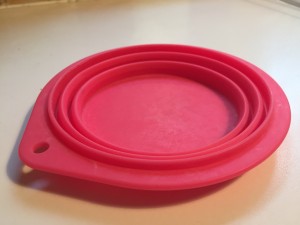 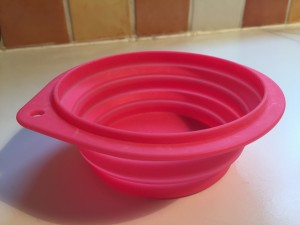 Just getting to write my news now this morning. We were pretty wrecked when we finally arrived in Cambridge last night at 7pm. It takes five hours from Hollyhead. We stopped off at Walsall on the way home and had ice-creams and I had a nap until Betty jumped on me! I also seen Emma-Janes high school Queen Marys. Very nice. 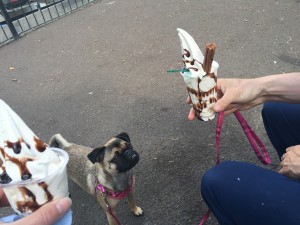 We both had such a great trip in Ireland. Everything went so perfectly. On the first day we headed to Carlow. We stopped into Ducketts grove on the way into the town and were so lucky as it was open to walk around inside. I’ve been out there many times but it has never been open like that. We got some great photos too. The fire place was amazing. I posed in front of it for a lord of the manor style photo with Betty! It would be great to photo-shop fix it to make it look nice again! 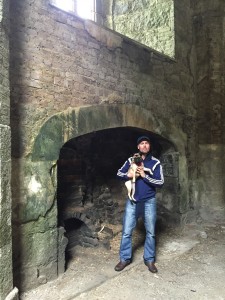 By odd coincidence the final year design show was on that very evening and it was really great for Emma-Jane to meet Mark there too and other friends from college too. The work was good but not as good as our show which was nice. It was great to see the lectures again too and Sean, Emma-Jane and I had gone for dinner first in a new restaurant down town. We were running late with everything but we didn’t care. We had to eat! Later that evening we had a quite gathering in the apartment which was really nice. Roisin and Chloe turned up at 9pm but we didn’t get back there unitl 9.20pm so sadly we missed them. Emma-Jane went to bed at 11am and I would have gone too but for Lee. He finally turned up at 11.30pm and I finally met his girlfriend Lele too so that was great.

The apartment wasn’t in too bad a state but I still had a lot to organise in the short time I was there. We stayed in Paul’s old room and Sean was in mine. The shower tiles in the en-suite shower are broken so I decided not to rent that room anymore until I can get it fixed. We need a new counter fridge too. In all fairness Sean had done a great job taking care of the place.

We go up early on Friday and after doing a bit of work cleaning the windows from mould we headed west to the Cliffs of Moher. It was a lovely morning drive. We stopped off at Bunratty castle too which looked spectacular as always.

Next it was on to the wonderful cliffs. We stopped off briefly in Lahinch beech for Betty to stretch her little legs again. 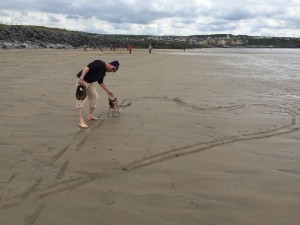 Emma-Jane was very impressed by the cliffs as I am every time I see them. We walked up to O’Briens tower and took out time going back to the car. We stopped off in Dolin for lunch which was lovely and then continued on our Burren tour. We even popped into my great friend Kieran Donohue’s folks briefly before heading for Barna where we would stay for the next two nights. 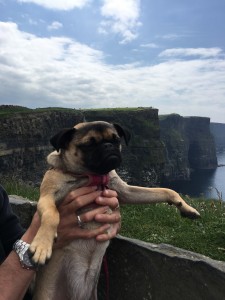 We had a reunion of sorts in The Blue Note later that evening and we were lucky enough to catch Barry Driscoll (USA), Owen and Kallie (London) who were home at the same time! I’ve included a picture of all of us. Really nice to see everyone again.

On Saturday the weather continued to improve and we had breakfast outside Griffins before I bought Emma-Jane a lovely gold Claddagh ring. It was much more expensive than mine and I felt like a real tight ass bringing this up in front of her. The seller told me mine was not Silver. I didn’t mind, I love my one and Emma-Jane found one she loves to that was great!

We had a coffee outside Neacthains’ for Mag’s (new tradition) before heading out the coast road to Corey & Colm. We popped in briefly to see my buddy Paric who was keeping well. I had missed him at Christmas so it was nice to show I still care. Connemara was looking great. We picked up an old hitch hiked also called Paric on the way from Casla to Mamm Cross . He had been drinking the night before and was very worse for ware. He made his bus to Galway with ten mins to spare so I was delighted to be able to help him on his way. I really don’t miss the hang over’s. J

I couldn’t fit Eleanor in the drive way but that was ok. There garden was looking most amazing. We all went for a walk to their lovely beach I even went for a swim with naked Colm on their island.

We got back into Galway around 7pm and spent a relaxing evening with Eileen, her sister May and Roy. She had prepared a lovely dinner as always and we talked late into the night before retiring with Betty!

Sunday was our last day in Ireland and we went for a lovely walk with Roy and the dogs (Betty & Fionn) down at silver strand. We had a lovely lunch with Hannah and Owen Quinnlan at 1pm and it was lovely to hang out with them and Betty & Bertie got on great! We popped into Owen parents briefly before heading out to Loughrea to see Ching and the kiddies!

Such a shame I missed Amanda again but next time for sure. We chilled with Sean on the last night and watched Deadpole which was great.

We were up early the next day to pack the car. I was able to do a quick deal to get rid of bubbles too before with left with Athony the janitor. We headed for the boat around 7am but for some reason only made the 8.45am boat with seven mins to spare! Phew….

Thanks to everyone & Eleanor (car) who made our 1221 mile trip so memorable!